Get IT Boot Camp Event 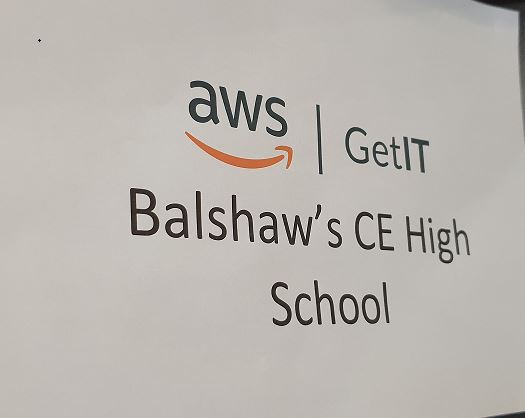 On Wednesday 6th November, Mr Mort and Mrs Townsend took a group of Year 8 students to MediaCity in Salford to the Get IT Boot Camp event organised by Amazon Web Services (AWS). The event is aimed at young students, especially girls, to inspire them to look at a future career in Tech.

Prior to the trip, all Year 8 students attended an assembly delivered by an Amazon Ambassador who introduced an App design competition. Students who have entered the AWS Get IT inter-school app-building competition have been developing ideas for an app which will solve a real issue faced by their school or local community. The winning app idea will be built and maintained by AWS.

Students have been working in teams (which must be at least 50% female) to develop an app idea. The top two teams were selected to send some members of their team to the Boot Camp.

The Boot Camp trip gave students a unique opportunity to receive expert advice from Amazon employees on furthering the design of their app. They looked at the needs of the user for the app, planned some of the key functions and looked at user interface design.

After lunch, they attended workshops facilitated by Future Foundations where they received training on how to present their idea before submitting it to the final of the competition.

Students really enjoyed the trip and will now take what they have learned back to school and feedback to their teams. The next steps will involve developing their app further and ensuring all the information is ready to submit to the competition early next year. They will also receive another in-school visit from their Amazon Ambassador.